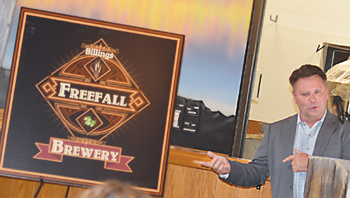 Four new businesses will be locating in Rimrock Mall – a brewery offering two food concepts, a men’s clothing store, a tattoo studio, and an art academy.

The businesses are following a trend at Rimrock Mall, 300 S. 24th St. W. in Billings, of being a community destination and hub, said Daron Olson, marketing director of Rimrock Mall, at a press conference where the newcomers were announced. Rimrock Mall is “now a place to ‘do’ rather than simply a place to ‘shop.’”

Freefall Brewery will occupy a long-vacant space, bringing with it one of the state’s largest tasting rooms and two food concepts: Audrey’s Pizza and FinnBrooks Monster Subs by Freefall Brewery.

Opening this fall, Freefall Brewery is owned by Steve Schlegel, a songwriter and musician with deep roots in the rock and country music scenes. Schlegel has worked with ZZ Top, Van Halen, REO Speedwagon, Huey Lewis and Bryan Adam as well as Garth Brooks and Keith Urban.  He will also tap his connections in the music industry to perform in Freefall Brewery’s musical area.

“Some of my closest friends play with Garth Brooks, Faith Hill, Carrie Underwood, Reba McEntire and Keith Urban,” Schlegel said. “You can count on seeing and meeting those band members in person at Freefall.”

The brewery will provide area residents with one of the largest tasting rooms in Montana and showcase beer brewed without harmful chemicals including chlorine that can affect the beer’s taste.

“Around Billings, people like a crisp, fresh beer without the aftertaste,” Schlegel said. “We know it will be very popular among the microbrew fans as well as the traditional beer drinkers and we’re excited to bring music and great food to the area to go along with our excellent beer.”

Freefall will be joined in its new location by Audrey’s Pizza, which Schlegel purchased after Audrey Anderson retired. FinnBrooks Monster Subs by Freefall Brewery will also be located next door.

For 42 years, CDS Performing Arts Academy (opening in June in a temporary space, then moving to a permanent space in July) has educated area students in singing, dancing and theater. CDS students have gone on to earn their Bachelor of Fine Arts degrees, work in the dance and theater industry and appear in world tours of “The Beauty and The Beast” musical and on “The Tonight Show with Jimmy Fallon.”

Menswear in the Mall

Mainstreet Menswear opens later this summer in the former White House | Black Market space. The high-end clothing store for men, owned by Steve Johnson, will carry men’s formal and casual wear, whether dressing for a wedding, job interview or night out. The new space will have a graciously masculine décor, with shiplap paneling and a rustic color palette.

Shockwave Tattoo will open a new space next to Dillard’s offering customized, one-of-a-kind, artistically crafted tattoos.  Shockwave is founded by local award winning tattoo artist Jason  “Ox” Radtke and his wife Tara Radtke, who have been in the business for more than 20 years. In addition to offering customized, hand-drawn tattoos, Shockwave will sell “shopshirts” and sweatshirts that can be customized to match an individual’s tattoo.  In addition, the store will sell the Shockwave brand of  eye and lip liner.