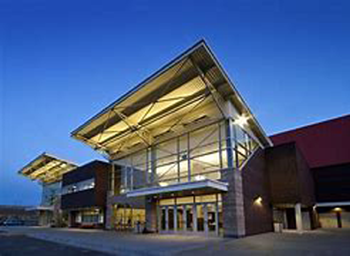 It’s been rumored for some time now that Billings School District 2 officials are interested in exploring the possibility of building a new stadium at Metra Park.

Although mentioned with some frequency at Metra Park Advisory Board meetings and presented as a possibility in the master planning process, Manager Bill Dutcher reported that both his staff and SD2 officials are now digging into the details and exploring the pros and cons of the idea.

SD2 Superintendent Greg Upham assured that SD2 board members are serious about exploring the possibility, adding that “the motivation is to look for a win-win.” He said, “We are not looking for someone to pay our bill.”

During the Metra Park monthly advisory board meeting on Tuesday, one board member, Mike Mayott stated that he believes other options should be explored because he doesn’t think that a stadium belongs at Metra Park. It gives up too much in other opportunities for Metra Park.

Mayott suggested that SD2 take a hard look at the possibility of locating on city-owned land adjacent to Amend Park, a non-profit soccer complex administered by the Amend Park Development Council (APDC), about which Mayott conceded he has a conflict of interest since he serves as manager of Amend Park.

“We should look at that before settling on Metra,” he said.

One advantage he pointed out is that the area is within the South Billings Boulevard Urban Renewal District (SBBURD), which has funds and bonding authority which could possibly remove the need for a stadium project to have to go out for county-wide bond approval.

Also, at the MP meeting was Jim Tevlin, SBBURD Controller, who explained to the board that the tax increment district has $24 million and it is part of their capital improvement plan to develop a recreation center, which could include the “the possibility of a combined football stadium and a gymnasium of sorts.”

Upham said that while he had some brief conversations about that possibility, he has not had an opportunity to explore it with the SD2 board or others. He said that being a public entity they would be open to exploring all possibilities.

MP Advisory Board Chairman Charlie Loveridge said that it is something to be explored in planning for Metra Park, which is still developing proposals as part of the master plan. “Hopefully we can figure out the stadium and the rest will fall into place,” he said, emphasizing that they want to have community discussions. “We want what the community thinks is awesome.”

Metra Park staff has been asked to stake out a possible area for the stadium on the Metra Park grounds to give everyone an idea of what a stadium might look like on the campus. It was noted, however, in discussions with county commissioners last week that where facilities will be located at Metra Park must await the finalization of plans of the Montana Department of Transportation which is in the process of designing a new intersection at 1st Avenue North, Exhibition Drive and Highway 87. The design is expected to provide a gate into Metra Park while closing two other gates. The new intersection is expected to have some overlap with Metra Park.

“We have a lot of things to talk about,” said County Commissioner John Ostlund.

For example: How a stadium will be financed and what will be the structure of the use agreement between Metra Park and SD2. Whatever agreement they have it will undoubtedly be very different than any other that Metra Park has with other users.

Ostlund emphasized that however it is built it will remain in county ownership.

Ostlund commented that an important financing concern is how it will impact other county taxpayers, most especially those in Lockwood. “Lockwood just built a new facility, and we have heard some concern that they would have to be paying taxes on two facilities.”

County Finance Director Kevan Bryan pointed out that the school district and Metra Park might encounter conflicts with having two mill levies on the ballot at the same time. Coordinating that would be an important part of the planning.

“Are you talking about the school district building it?” questioned Commissioner Don Jones, to which the answer seemed to be “maybe” – that’s among the things that have to be ironed out.

SD2 Athletic Director (AD) Mark Wall said, “We want this to work for everybody.” He reminded how well it worked out for all schools in the South Central area when track and field events were held at Metra Park.  “We believe that a stadium and a track can bring all kinds of benefits to our community….There are all kinds of ways to use the field.”

Wall said he has had discussions with South Central Montana AD’s and “with the exception of Lockwood everyone is well behind this.” He noted that Huntley Project and Shepherd could also use the facility, and expressed confidence something would be workable to accommodate Lockwood’s situation.

Wall suggested that the school district “would be responsible for track repair. It would be our obligation …  we would have to do that any way no matter where it is located.”

One of the biggest benefits of having the stadium at Metra Park would be the availability of parking.

Other issues that must be ironed out are events with conflicting schedules. Metra Park does not want to lose any of its long-standing users or events. A high school’s sport schedule is very busy and intense.

The school would probably be responsible for managing the scheduling of events.

Ostlund emphasized that Metra Park would also be just as adamant as ever about collecting capital improvement fees (CIP) fees as a part of ticket sales or compensated for in some manner. “We charge those for capital repair,” he said, “We have come a long ways and I don’t want to slide back,” referring to Metra Park’s ongoing maintenance program.

Wall explained that the CIP conflict that Metra Park has had in the past has been with the Montana High School Association and their events. It would not be an issue with SD2 and their ticket sales. Capital improvement costs has always been important to the SD2, too, he said and the manner in which SD2 has dealt with MHSA could be applied at Metra Park.

“Our activities are mostly funded by ticket fees and activity fees,” explained Wall. Each school makes about $40,000 a year they use for equipment, etc.

Jones urged SD2 officials to talk to other school districts in the county to “get their buy in.” He said, “I want to make sure we aren’t undercutting ourselves within the community and we could all work together.”

Charlie Loveridge spoke to other issues that must also be discussed and agreements reached upon such as sharing sponsorships, maintenance fees, ticket sales, concession sales. About concession sales, Loveridge pointed out that having the regular attendance that the stadium would bring, could result in a great opportunity to greatly enhance concessions in a way that “would make it amazing,” generating more revenue and more ticket sales for events.

A “myriad” of issues involving unions and contracts and other legal issues must also be dealt with, reminded Ostlund.