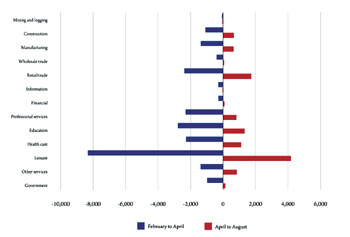 It’s been reported before that the economic impacts on Montana of the COVID-19 crisis has been greater than the Great Recession, by Dr. Pat Barkey, Director of the Bureau of Business and Economic Research, UM, but a most recent published report in the Montana Business Quarterly, starkly emphasizes the contrast.

According to Barkey, “The economy was barreling along in January and February of 2020, with record low unemployment and respectable growth. Then the world stopped in mid-March. When it resumed, it was on a different course. Much of the economic data, which is released annually or perhaps quarterly, simply can’t describe recent events.”

Total U.S. nonfarm employment declined by more than 22 million jobs from February to April, a decline of about 14.5%.  “… such a decrease has to be among the greatest month-to-month declines in recent history. There is no question that the U.S. economy went into a free fall in the spring of 2020,” writes Barkey in the Montana Business Quarterly.

—The U.S., Montana and three of the state’s urban areas experienced sharp declines from February to April 2020 and increases from April to August, with moderating growth in July and August. Current employment levels remain mostly below peak values.

—The employment declines in the U.S., Montana and the urban areas were much greater than were experienced during the Great Recession. These decreases were probably larger than at any time in recent history.

—The changes in employment in the U.S., Montana and the MSAs were concentrated in a few industries. Leisure, health care and retail trade accounted for most of the declines and subsequent increases during 2020.

According to Barkey, “The concentration of 2020 impacts in a few industries suggests that they may mostly reflect the lockdowns and subsequent (partial) re-openings associated with the pandemic. Recessions, on the other hand, usually involve simultaneous trends in a wide variety of industries. If the events identified here spread to the rest of the economy, the COVID-19 recession may have a long way to go. If the impacts are confined to several industries (perhaps due to government fiscal and monetary policies), the recession may be shorter.”

Seasonally adjusted nonfarm employment in Montana declined sharply during the spring on 2020. The number of workers decreased from 489,400 in February to about 425,100 in April, down about 13.1%. The corresponding drop in U.S. employment was 14.5%. As with the nation, Montana experienced sizable increases in the April to August period, but the latest employment figures were still slightly more than 5% below the February peak, and the July and August growth was modest.