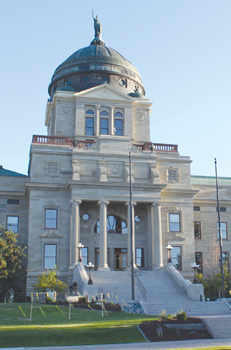 Between virtual technology and a new bill drafting system, the 2021 Montana Legislative Session is operating at a slower pace than we’re familiar with. The Legislative body has chosen to opt out of its traditional Saturday floor sessions, saving those days for business days at the end of the season. Montana’s legislature is allowed to meet for no more than 90 working days. ‘Saving days’ by not conducting a floor session on Saturday will lengthen this process, but it won’t cost taxpayers additional operating money, as they’re still only meeting for the allowed 90 business days.

This matters because it has pushed the transmittal deadline – the day all non-revenue bills must be moved to the second house – back several days. This means we have slightly more time to introduce bills and get them worked through the process before they must be transmitted to the other chamber. Right now, it looks like the transmittal deadline will be the somewhere in the end of the first week of March.

This bill was first heard in the House Fish, Wildlife and Parks Committee and it was passed by the full House. This week the Senate Fish and Game Committee heard this bill and passed it in Executive Action shortly after. These amendments to current trespass statute regarding hunting makes the legal language more explicit and may make penalties more severe for failure to obtain landowner permission when hunting, trapping or retrieving game on private land.

This is an important bill to show support to private landowners who take trespass seriously. Under this amended legislation, a hunter who fails to obtain landowner permission and trespasses on private land may be fined a minimum of $135 (the current fine), or up to $500. This allows the legal body handling the charge to assign a penalty depending on the severity of the charge. It also requires any person convicted of trespass to forfeit any current hunting, fishing or trapping license issued by the state for not less than 12 months or more than three years. It also includes language to further penalize subsequent trespass convictions. This legislation sends a clear message that trespass is a serious offence in Montana. It’s important to note that this bill was brought forward by the Private Lands Public Wildlife (PLPW) advisory committee, with the intent of strengthening landowner/sportsmen relations. We appreciate this effort.

The concept of a “local option sales tax” has been brought to the legislative body in many forms, many times over the years. A local option sales tax would allow municipalities or city/county governments to implement a sales tax in their jurisdiction with the approval of a local electorate vote. This iteration of the idea would allow for up to 2 percent sales tax on retail goods, and it specifically notes that revenues could be used for property tax relief or for local infrastructure upgrades in the jurisdiction in which it is assessed.

While our farming and ranching members strongly support efforts to relieve property taxes, they are equally adamantly opposed to local option sales taxes. Here’s why: the funds raised by this tax are not evenly distributed throughout the state and essentially result in the redistribution or rural dollars to urban areas. Those of us who live in rural Montana know there are many supplies we have to go to larger towns to purchase. When a local option sales tax is in effect, we end up paying the tax in the city and leaving our money there. It exacerbates the transfer of rural dollars to more urban areas, essentially asking rural people to help relieve the property tax in urban areas or fund the infrastructure needs of that municipality. Rural people don’t benefit from this system.

We’ve shared updates on these two appropriations bills before, but it’s important to note that these funding bills require long focus and diligence. We’re frequently monitoring their progress and show up regularly to voice our support for funding for specific parts of these bills.

In addition to providing bonding allocation for the proposed and much-needed new Veterinary Diagnostics Lab, HB 14 provides for long-term bonding to support a new Wool Lab and improvements at some of Montana’s Agriculture Experiment Stations, too. The Wool Lab is currently one of only two wool research and service laboratories in the country. It provides critical research and analytical services to a large region of sheep producers. Montana Agriculture Experiment Stations provide vital research for our state’s No. 1 industry, and innovations that support our livelihoods. Additionally, MFBF has gone on the record supporting the Department of Livestock and Department of Agriculture budgets, which are part of HB 2.