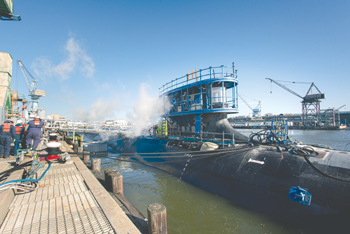 The future USS Montana has been launched in Newport News, Virginia. The nuclear-powered fast attack submarine will be completed pier-side while crew training continues toward sea trials this year. The boat’s commissioning into the Navy fleet is likely in early 2022. Huntington Ingalls Industries announced that the 7800-ton Virginia-class submarine was launched into the James River at the company’s Newport News Shipbuilding division.

“Our exceptional young sailors want all Montanans to know that in their training and the fulfilling of their operational responsibilities, they are energized by the support they feel from Big Sky Country,” said Delaney about the launch. “The same will be true when they are eventually deployed aboard the USS Montana in defense of our nation.”

Delaney said that crew members who have visited various parts of the state to get to know her people, history, culture, and economy have been tremendously impressed by the Montanans they’ve met.

“We’re all committed to making Montana proud as we work toward taking the state’s namesake warship to sea for the first time later this year,” said Delaney.

Montanans are actively supporting the commissioning and crew of USS Montana through the USS Montana Committee, a Montana nonprofit corporation with a number of responsibilities. Included are building a support relationship between the crew and Montanans for the boat’s 30-year service life and providing certain enhancements to the warship, including an onboard Montana history and culture display being developed with the Montana Historical Society.

The Committee will be doing informational presentations around the state this year with a unique submarine-sized ship’s bell cast as a replica of the one aboard the first and only other USS Montana, an armored cruiser commissioned in 1908. The bell will be presented to the boat and its crew at the future USS Montana’s commissioning.

According to Huntington Ingalls Industries, until launch USS Montana had been in a floating dry dock following transfer from a construction facility in October. The dry dock was submerged, and the submarine was moved by tugboats to the shipyard’s submarine pier for final outfitting, testing and crew certification.

Through the teaming agreement with General Dynamics Electric Boat approximately 10,000 shipbuilders, as well as suppliers from all 50 states, have participated in USS Montana’s construction since the work began in 2015. USS Montana is approximately 92% complete.